After being informed by the missus that the little freezer was about to be de-frosted I decided it was time to remove the little pots and do the rounds.
First to the Banthorpe's residence to drop off the macro moths in their convenient little cupboard near the front door, then on to the Mannings to drop off the half dozen or so micro moths. Any excuse for a cuppa and a sticky bun.
The results of the micro gen dets came in today and after checking my notes against the results, I am feeling a little bit chuffed.
9th Sept, (after consulting with Trappingsofsuccess) Agonopterix nervosa, worn, tbc
12th Sept, 2x Depressaria badiella tbc
17th Sept, Very worn Celypha lacunana tbc
26th Sept, Depressaria sp. prob badiella tbc
20th Oct, Depressaria sp. prob badiella tbc
No problem ! 6/6
Then we come to 19th Sept
223/216 possible Nemaxera betulinella could be Nemapogon cloacella, worn.
Pleased to say it was the former and a new VC30 county first record.
Gen. det. David Manning, county micro moth recorder.
The 28th Nov. got even better when I checked the traps/walls this morning (29th)
I have waited 5 years for this common woodland species to drift into town .....
.... Mottled Umber at last !
My garden was probably the last remaining site in Bedfordshire where this hadn't been recorded. This one is a nicely patterned example of this very variable species.
Edit : A second Mottled Umber found on the brick wall this morning ! ... 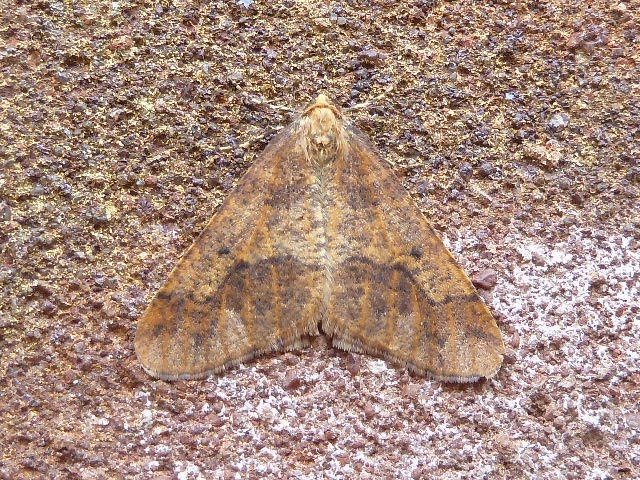 The warmer nights since the mini cold snap a few days ago has triggered a hatch of Double-striped Pugs with two around the lights last night.
The bulk of the catch over the last 5 nights has been Light Brown Apple Moths, Epiphyas postvittana, with 15 records, and Common Plume, Emmelina monodactyla, with 5.
A second Sprawler this year was a good find on the 13th Nov. and only my 3rd ever garden record in 5 years of trapping.
Also on the 13th was a Red-green Carpet and a worn Lesser Yellow Underwing.

It's been a good year for the little migrant micro Plutella xylostella, The Diamond-back Moth, with record garden totals this year.
One more was in the trap last night ...

... and I almost overlooked a Grey Shoulder-knot on the light coloured stone wall near the trap.

The garden traps have been empty for a few days due to the cold spell apart from the odd Light Brown Apple Moth and a Common Plume.
Much warmer last night though and a Sprawler turned up.
This is rare in my garden as it is a woodland species and there is little woodland in the immediate vicinity.
The catch :-
0998 Epiphyas postvittana, 5
2107 Large Yellow Underwing, 1 .. worn
2227 Sprawler, 1, year first
2306 Angle Shades, 1

Much cooler at 8.3 deg. and a stiff breezy.
Very few moths in the traps but managed to add Acleris sparsana to the year list which has almost ground to a halt of late.