Wind and rain was the order of the night so no traps on.
Instead I placed a blacklight blue fluorescent in the patio door window which was the least windy part of the garden and driest.
Just 3 moths turned up, a forlorn looking Clouded Drab, a Common Quaker, and a surprise Yellow-barred Brindle for the garden year list ....
Common Hoverfly
on the sunny wall this morning ...

Last night temperatures fell to below 3 deg and tonight could be below zero, so I'm hoping the Victoria Plum blossom survives, which is now in full bloom, or no plums this year.

Not much to report from the garden moth traps, the usual hardy Orthosia species, and just one addition to the year list which was in the shed, White-shouldered House Moth.
Best of the rest were the second Nut-tree Tussock and a second Spectacle.

Yes it is this time.
Found during the daytime on the patio door window. 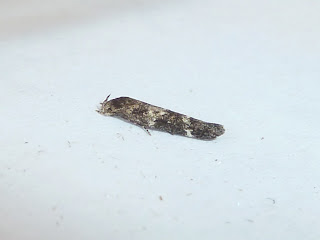 It was a calm, warm night last night, with low level cloud blocking out the full moon.
Minimum temperature was 10.6 deg C but light rain up until late evening was a nuisance.
A year first Spectacle was earlier than expected but the rest of the catch were the usual batch.

A warm calm evening, almost perfect for the moth traps apart from a 95% bright waxing moon.
There was a nice surprise in the actinic trap this morning, a Brindled Beauty, new for the garden.

Other year first visitors were :-
Brimstone Moth and Twenty-plume Moth, plus a tiny micro that defied the limits of my little Panasonic Lumix
That one will go to Mr Manning for ID.

A chilly gusty wind for most of the evening kept the numbers down, especially the micros, but it was still warm enough at 7.5 deg minimum.
The usual moths were present with only a Satellite to add to the year list.
The Clouded Drabs are looking a bit worn now and the Satellite looked older than Telstar .
My actinic 11 watt PL trap has been downgraded from 4 lamps to two lamps as it was lighting up the neighbours upstairs windows. This will also save me around £80 per year and it doesn't appear to have affected the catch ... everyone's a winner.

Lots of moths about last night until midnight when the skies cleared and a bright waxing moon slowed things down.
Two Mompha, one 6mm ish long, possibly propinquella, and the other much smaller at around 4mm, which I cannot identify but I know a man who can ! 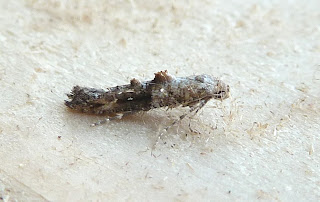 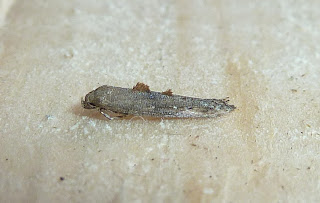 Thanks Matt and Skev ... NOT Mompha  ... 483 Epermenia chaerophyllella
The same moth I called a Mompha last year ... some people never learn

A year first Pale Mottled Willow and a first appearance for Small Quaker in the garden and 10 Early Grey was a high count. 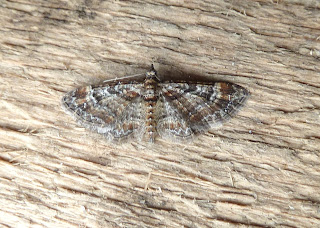 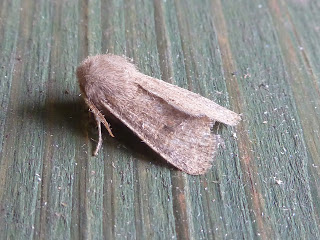 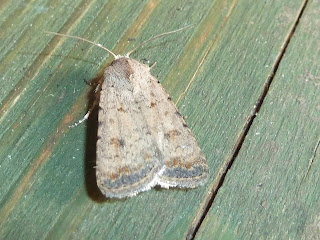 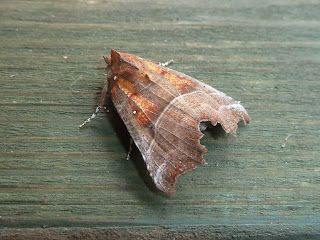 No new moths to add from the garden traps, zero degrees for Friday and last night didn't help but the daytime sunshine has been quite warm and lots of activity was noted.
Yesterday and this morning saw 4 species of butterfly, Brimstone, Small Tortoiseshell, Small White and Peacock.
Lots of large and small Bumblebees and a healthy population of Bee Flies.
Only one moth to add to the year list which was nowhere near the traps, instead it was buzzing around my guests in the lounge room and narrowly avoiding attempts to swat it ... Tinea pellionella, Case-bearing Clothes Moth. 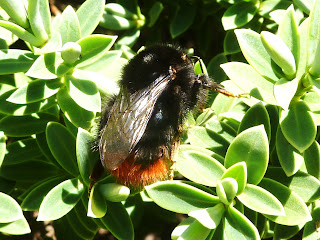 No flowers yet on the Hebe for this large Bumble Bee (above) which I think is Bombus lapidarius. 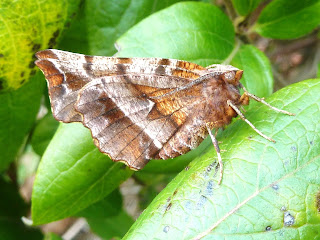 
A little cooler than the last few nights but the wind had died down.
17 moths of six species were in the traps, the bulk of which were Early Greys'

I put the traps on last night even though the wind was gusting at 40 plus mph.
That's number 8 on the Beauforte Scale, which is gale force !
As the wind showed no sign of abating, I went out at 21.00 to switch off the traps but decided to leave them on after finding a few moths clinging on the traps for dear life.
It's incredible how anything managed to fly in those conditions but 14 moths of 8 species were recorded ..

Back to the vernacular names ....
The above pics show  some examples of micro vernaculars, one well established, one coming into acceptance and two that are liked, ignored or even rediculed.
Personally, I like the idea of these micro vernacular names coming into common usage as long as the Latin name is used alongside.
There is something quaint about using the vernacular.
If these odd names for the micro moths eg Bells, Groundlings, Smudges, Buttons etc were standard, as they appear to be in certain publications, then why not use them ? Some county moth sites do, and for future generations the names would just trip off the tongue.
But as Mark Skevington points out in his blog, use it or not, it is imperative that the Latin generic/specific names are always used first and foremost, and I whole heartedly agree with that, vernacular names are flights of fancy, think about some of the macro moth names.... but we all use and like them.
There is a certain permanence in these vernacular names when accepted as common usage, for example, the taxonomic Latin names could possibly change several times over a period of time but an Epiphyas postvittana with a few taxonomic name changes would still  remain a Light Brown Apple Moth  and there would be no pronunciation difficulties.
Epiblema uddmanniana is now Notocelia uddmanniana, on the UK Moths site it is still Epiblema but Bramble Shoot Moth is a reassuring constant.
I would also like to see our European neighbours doing the same...using the Latin but adding their own vernacular as a point of international interest and amusement...  for Light Brown Apple Moth ?
Hellbraun Apfel Motte has a certain Teutonic ring to it
Lichtbruin appelmot for the cloggers
Not sure what the French would call theirs ... Brun Clair Pomme Papillon de Nuit... (shrug) .
any cunning linguists out there ?

Minimum overnight low ... 6.9 deg C
Still warm albeit windy, which possibly helps my garden tally with a few blow-ins.
Another good night in and around the traps with 33 moths of 13 species.
Caloptilia rufipennella was a good spot on the trap.
I'm wondering about the vernacular I've seen used for this moth ... Small Red Slender.
I'm all for a simple common vernacular, at least you wouldn't hear numerous pronunciations of Latin  for the majority of micro moths. (and wonder who is right).
Ideally there should be both Latin and vernacular in common usage, as in the macro moths. You can't go wrong with Small Red Slender, although it does imply that there is a bigger Red Slender on the loose, so why not just Red Slender ? Or is there a Red Slender that I haven't noticed ?
I'm sure I've said nothing here that hasn't been discussed several times in the past so here is last nights catch....

Not as humid as last night but still warm at 8.4 deg C min. but with a gusting wind.
16 moths were counted, 7 of which were Common Plume.
Red Chestnut was a good find as I usually only get singles each year, rarely two.


Grey Shoulder-knot was also a welcome addition to the year list ...

Moths at last !
Warm and windy, minimum low ... 8.3 deg C
An excellent evenings garden mothing with 26 moths of 13 species ...
Nice to see the Herald, one of my favourite moths 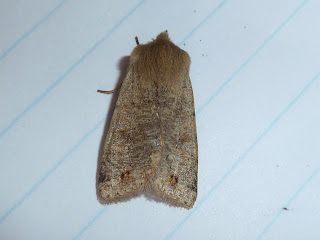 First Pug of the year

The warmest night of the year to date produced just 3 moths, the rain showers and wind hampering proceedings.
I nearly missed this Double-striped Pug on the brick wall .... 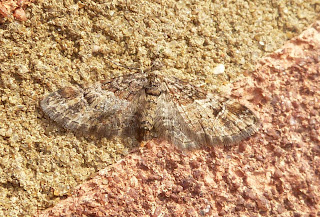 TRAP TRIAL
A portable lightweight trap is about to make its debut this weekend in Home Wood.
Trap, lights, control box and battery weigh a little over 6.5 kg. and the trap folds flat to fit in a rucksack making it easy to lug it abroad, or to those places where there is no vehicle access and a generator or even a heavy 24Ah battery set-up would be a little tough on legs and back.
A dusk to dawn photocell means it can be dumped in situ during the day and will switch on and off automatically and although the skinner type trap would get a bit wet during a rain shower, the lights are waterproof so no harm done except for wet egg boxes.
The 2.4 watt lights have been tested with a fully charged battery ( 7 Amp hour, 12 volt ) and were switched off after 14 hours, still as bright as ever.
If successful, it will go in to production ... Watch this space


The Wine Race
That jammy sod Matt (Capt. Trappings) has just returned from a 3 week break in the sunny Cayman Islands. Did he slip behind in the wine race ?
Not a chance.
The milder weather started on the day he returned (10th April) after the coldest March/early April since Black Beauty was a foal !
Speaking of dark horses... that Ben Sale has snuck into the lead ..........................

6 deg C at dusk last night so I fired up the trap/shed lights. I gave the traps a short 2 hour run on Saturday as it was 4 deg at early dusk and bagged a Common Quaker and Agonopterix heracliana before the temperature plummeted to minus 3.
Last night was a little better with two additions to the garden year list ...