Temperatures were at 8+ deg and little or no wind.
It could have been a perfect Jan evening but for the persistent fine drizzle that fell until late evening.
On the 22nd Jan, I caught two more Dark Chestnuts, bringing the total to 9, so it was a nice change to find my second macro species of 2012.....Pale Brindled Beauty.
A Light Brown Apple Moth made up the total catch.

﻿Two unidentified caterpillars grazing on moss or lichen on the brick wall:- 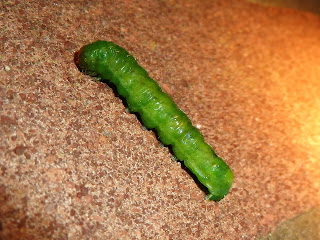 The 2012 wine bet ( macro moths only ) took an early knock as Captain Trappings notched a superb Spring Usher on the 18th.
This would be a very welcome rarity in my urban garden.
Last night saw my 7th Dark Chestnut for january and is my sole macro to date.
Back to the wine bet.....
I have lost this bet for the past two years since its inception in 2010 but last year was very close (macro total) and in 2010 I missed out on late March and most of April due to holidays, which included an unplanned extra week due to Icelandic volcanic ash.

Regular updates to follow.
Posted by Trent Duval at 11:56 2 comments

1 x Dark Chestnut
﻿1 x Epiphyas Postvittana (Light Brown Apple Moth)
The mild weather has woken up all sorts of creatures in the garden.
A hoverfly, green lacewing, many spiders, earwigs, a bluebottle fly, ladybirds were all about last night amongst others.
They will be in for a reality check in the next few days looking at the forecast.

Here we go again...
I've had the traps on from Jan 5th for zero results up until last night.
SO, the year starts with 2 micros and a macro.....
1 x Epiphyas postvittana...Light Brown Apple Moth...FFY
1 x Emmelina monodactyla...Common Plume...FFY
1 x Dark Chestnut...FFY

This years wine race between myself and Matt "Captain Trappings" for the most species caught in our respective gardens will be for the macro species only.
Total.....3
Macro...1
Micro....2

2011 ended with the last moth (macro) on 27th Dec ( Dark Chestnut ) before heading up to Teeside with wife and friends to visit the Outlaws for the New Year celebrations.
Had far too much to eat and drink on the 29th but managed to get up early on the morning of New Years Eve and visit Greatham Creek at low tide and enjoyed the sight of 40 + Grey Seals that had hauled themselves up the muddy banks.
This area of the North-East is excellent for birding too.
Red and Black Throated Divers were present around the bay at Hartlepool along with a Slav Grebe, Med Gull, Glaucous Gull and a Black Redstart near Seaton Carew.
All the above were courtesy of a local birders' digiscoped playbacks as I didn't take my bins.
I dipped out on my target bird, Purple Sandpiper,  as per usual they were present around The Heugh the day before...typical, and the weather was so bad that I didn't bother to go to Commondale on the North Yorks Moors to bag the ever-present Red Grouse, so famously, I bought a bottle of the stuff at the local offie.
Back to the moths.......
I waved the white flag on the species race with Matt and coughed up some quality red for the 2010 and the 2011 season bet for the most species caught in our respective gardens....Gutted !
I was caned on the micros but came a respectable second on the macros.
This year we will resume hostilities but the race will be for Macro species only. Game on !
I am praying for some mild weather during February as Captain Trappings, wife Karen and his two sharp-eyed rugrats, Keely and Louie will be away in the Cayman Islands for 3 weeks....I would have preferred their trip to be in May/June/July ! I need an edge.
2011 summary.....
Traps were set on 320 nights
Total species for year...434
macros...249
micros...186
Garden Total......................492
macros from July 2009 onwards.....286
micros from 2010 onwards..............205
Thanks to our County Recorders Andy and Melissa Banthorpe (macros) and David Manning (micros) for their invaluable help/advice, and thanks to fellow bloggers who have chipped in with all sorts of tips, help and advice..your comments have been very much appreciated and I hope that 2012 will be a good year for you all.
Posted by Trent Duval at 21:11 0 comments