For the past week I have had Fieldfare in the garden.
Not the most startling news I know, but in my town garden that is a notable event.
The snow covered fields have driven the Fieldfare to seek other available food sources and a flock of c70 flew through the Dells valley, which is the adjoining back gardens in between the two rows of houses, obviously on a recce.
A kilo of halved Braeburn apples was too much for the normally wary birds and all week I have enjoyed the sight of feeding Fieldfare on the snow covered back lawn area.
Long-tailed Tits and regular sightings of Goldcrest were notable through the week.
Now the big thaw has started, the Fieldfare will move out of the gardens, but it was certainly a plus during the freeze. 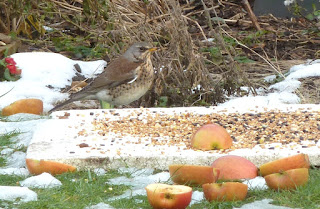 Below ... Now that the top of the above wall is clear of snow......
Fieldfare poo, packed with Cotoneaster/Pyracantha berries/seeds with a Braeburn apple pulp binding. 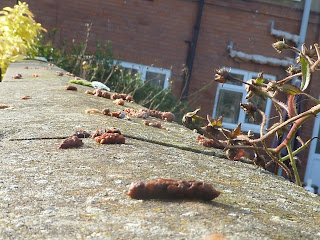 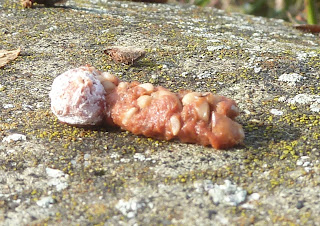 A Lesser Yellow Underwing was totally unexpected last night.
It was quite worn and is probably a migrant carried over on the recent mild southerly winds.

Just the one moth last night, but a nice year tick.
Pale Brindled Beauty.
It was attracted to the 40 watt blacklight in the shed window, the actinic lights on the trap scored a big zero.

Wine Bet Latest.
P.B.B. brings my total to 6 species for the year but Matt has weighed in with a cracking Mottled Umber to pull level.
Mottled Umber remains unrecorded at The Dells so "advantage Matt"
Posted by Trent Duval at 16:29 2 comments

Early Grey was the earliest record for the garden, found on the wall by the trap.
Yet another Dark Chestnut, which is the 5th this year and much commoner in The Dells garden than Chestnut.
Other interesting creatures were the variety of flies around the trap and a Rosemary Beetle, Chrysolina americana.
An unidentified larva was seen munching away at my Senicio cineraria (Silver Ragwort) which also suffers occasional attacks from Cinnabar larva as it is closely related to Common Ragwort.

The mild conditions continue with min temp of 8 deg overnight.
A disappointing 6 moths of 3 species were in and around the garden trap ...
Light Brown Apple Moth x 3
Emmelina monodactyla  x 2
Dark Chestnut
Nothing new for the year list and already 1 behind in the Wine Race.

Matt dumped a battery powered twin Blacklight/actinic into Home Wood  last night and we checked it out this morning.
18 Early Moth
2 Chestnut
1 Acleris sp. for ID (below) 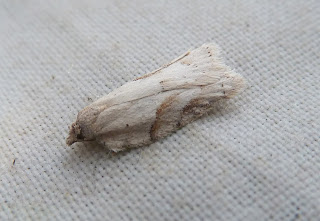 My guess would be Acleris logiana ?
Posted by Trent Duval at 10:51 2 comments

The trap was in action on the 2nd Jan .... despite a very mild evening, a big zero was recorded.
Last night was a little better with 1 Light Brown Apple Moth, 1 Emmelina monodactyla and a Dark Chestnut.
A large bumble bee was flying around my bright yellow hi-viz jacket during the day, probably the earliest one I have seen,  and a water beetle was trapped in the garden trap.

A happy, healthy New Year to all.

2012 was officially the wettest year on record and a poor year for mothing.
(I've just heard it's the second wettest. Apparently the year 2000 was the wettest)
Since most pupae are developing near, on or under the ground, a large number were probably washed away or drowned.
This could mean low numbers for a few years before the populations recover.
I hope my simplistic theory is proved wrong by a bumper 2013,

THE ANNUAL WINE BET between myself and Matt for the most species of moths caught within our garden boundaries, will be all inclusive, macro/micro, if it's a moth ... it counts.
Yours truly has lost the previous 3 years !

The trap has been modified a little, the 20watt blacklight ballast developed a fault so I have removed it and replaced it with two more 11 watt PL actinic lamps (see below).