This year I have planted Day Lilies and I am determined to see them flower in a healthy state.
The big threat is the Lily Beetle, Lilioceris lilii.
It can devastate your lilies or fritilliaries before you know it and I have an endless supply of the little buggers !
Control is difficult without using chemical based products that can also harm bees so the old fashioned hand picking is used.
I have a block of 30 plants and so far I have removed 20+ of the little perishers. 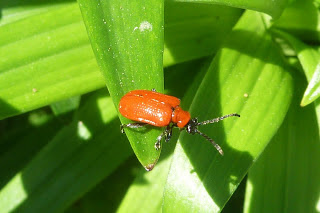 They are easily seen but when attempting to remove them they simply pull in their legs and drop to the ground.
They are jet black underneath and nearly always land on their backs making them hard to find on the soil below the plant.
Even though I regularly remove the offenders, some manage to lay eggs and it's then the trouble really starts.
These beetles lay around 400 + eggs, attaching them to the underside of the lily leaves in batches of around 10 per leaf.
The eggs are covered in a soil/saliva mix for protection.
When the grub hatches, it adds its own frass to the mixture making a blackish mound of goo that gets everywhere when you try to remove them.
They drop to the floor when fully developed and burrow into the soil where they pupate and emerge as adults in the same year ... bad news. 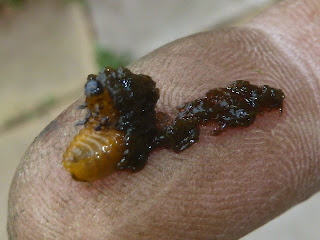 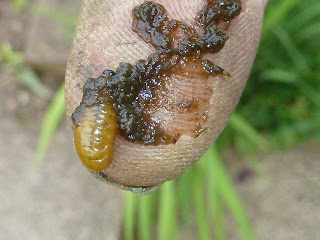 The pictures speak for themselves ... this is what covers the lily plant if left unchecked. The spit and frass mix has been partly removed to reveal the grub. The top pic shows half the mound of goo ... this completely covers the grub as it munches away at your prized lilies.

Below is a larva that is almost ready to pupate .... 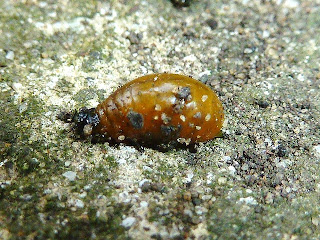 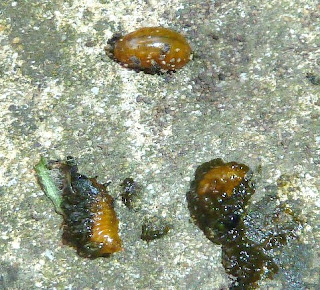