Back from a week in Sorrento and it seems that the shortage of Large Yellow Underwing was simply due to a late hatch.
A trap record was set for LYU, (30th Aug) with a count of 83, not the highest total (99), but that was with two traps operating.
Common Wainscot numbers also increased (9 on 30th Aug) with a host of Setaceous Hebrew Character's.
Small Wainscot (31st Aug) was a year first.
It died in the pot so only a corpse pic available, and Small Square-spot made a rare appearance last night (1st Sep) only the second record of this locally common moth..

Out of interest, here's a male Wall Brown butterfly.
Getting very scarce around here, I haven't seen one in an age, this one was at the top of  Mt. Vesuvius !
GEN DETS ...
Many Thanks to David Manning, Bedfordshire and Northamptonshire counties micro recorder.
This man, despite being 113 years of age, laboriously sifts through literally hundreds of little pots that I drop on his lap.
Some are common micros that may be a little worn, some are creatures that I have identified but always get confirmation or contradiction, and a lot of moths that require gen det or I simply haven't a clue what they are.
He never takes more than a week to identify them and e-mail the results back, no matter how many you send.
My last lot was around 300 moths that included my own back yard, Matts', The Lodge and often Home Wood also, so well done that man.
I'm going to send him 500 next time... (hope he reads this :)
Among the batch from my garden, a county first for VC30 on 2nd Aug, plus another on 11th Aug ...
1114 ... Eudemis porphyrella .... 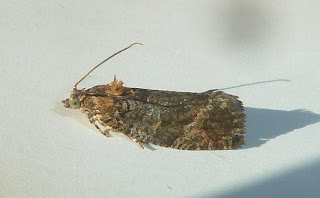 I recorded it as E. profundana but the gen det proved otherwise .. one to look out for as they can vary in ground colour to look very much like profundana.

Thanks to our intrepid recorder I have now passed the 600 species mark for my garden which now stands at 606.
New garden and year moths list can be seen on 2013 page.