Drizzle all night.
Trap covers on.
Not so many moths around last night, they prefer proper rain to fine drizzle.
It was still quite warm though and 20+ species were recorded.

Sitochroa verticalis was added to the garden year list along with Cnephasia incertana (confirmation needed), but the addition of Argyresthia cupressella raised a few questions.
Although it is tiny, it is easily identified.
The bright white head stands out and there are distinct black markings near the wing fringe.
This moth was first discovered in 1997, apparently brought over from North America with its food plant.
It feeds on Cypress's, Juniper's and their cultivars and is now rapidly spreading through the UK, not on the same scale as Cameraria ohridella but it is now well established, eg 30+ in Norfolk and records north of Bedfordshire, 2 in Northants, and further records in surrounding countys.
The question is ... Why, in my Biggleswade town garden, am I the only one to record it in VC30 ?
In 2012 I chalked up the first VC30 record, in 2013 the second, 2014 the third record and now the 4th and 5th record in 2015 with possibly more to come.
That defies all logic.
I can only assume it is being overlooked as it could easily be missed in amongst large numbers of A. trifasciata, C. ohridella, A. goedartella for example, and nobody is bothering to look a little closer, or these tiny micros are simply being ignored.
Either way, I can't believe that I have the VC30 franchise on these neat little moths.
Below:
Sitochroa verticalis, quite a worn example, with a shot of the underside. 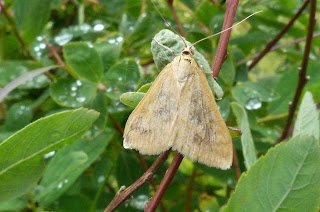 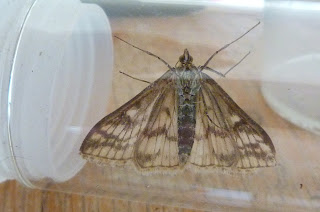 Below:
Cnephasia incertana, This one will need checking to be sure. 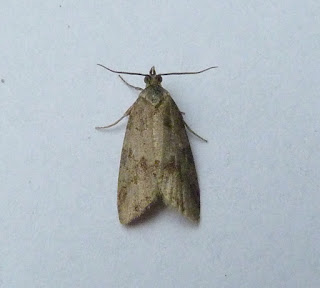