Nothing too exciting last night. I went out for the evening so I set the traps beforehand.
Had to put one trap inside the shed and one under cover as the Met Office had forecast heavy rain for most of the night.
Got home at 11.30pm and it was drier than a medieaval monks manuscript, so much for covers !
Still got a few moths tho, 5 x Common Quaker, 5 x Clouded Drab, an Early Grey, 3 x A. heracliana and a single A. acanthadactyla. Lowest temperature recorded through the night was 7.8 deg with a slight breeze, so I regretted not taking a chance on the rain and leaving the traps out in the open.

I put this home-made nest box up in mid Feb and had a Blue Tit investigate it on the same day.
It's made from an apple tree log and just to keep it dry I have tacked a piece of roofing felt on the top and jammed it between two forks of my large Bird Cherry tree.
A pair of Blue Tits are now building a nest inside so hopefully they will succesfully raise a brood.
I tried to get a shot of a B.T. at the nest hole this morning without any success so I'll try later. My Sparrow tenement block, under the eaves has been churning out baby sparrows for three years now, oddly enough it has been in place for 8 years with no interest in the first 5 years. More on my Sparrows later. 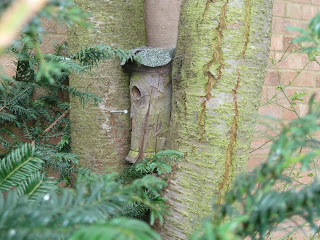