Overnight min. temp. 9.1 deg. gentle southerly breeze....then RAIN
Once again the weather put the brakes on what was becoming an excellent night.
It was still 12 deg at 23.00 hrs. and the local moths were itching for an excursion around The Dells garden.
But at 23.30...down it came and continued for the rest of the night.
Best moth of the night by a long chalk was Chamomile Shark, a garden first and
scarce for the county with just 23 past records.
NB. Another county Chamomile was caught on the same night by Will George....see blog on http://i-moff.blogspot.co.uk/  I believe this one is a male, whereas mine is a female, which deposited eggs in the capture pot.
Thanks to Andy & Melissa Banthorpe (county macro recorders) for confirming ID 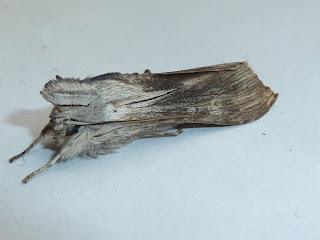 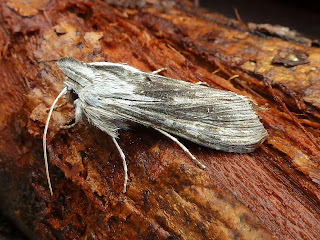