It's been a bit quiet around the traps for the last few nights.
Clear skies and a full moon are not ideal but at least it's been warmer.
Cochylis hybridella was added to the year list on 2nd Sept.
Cochylis hybridella 22nd Aug
from a batch sent to micro recorder replaces the above record.
Depressaria badiella (99% sure) will need to be confirmed in last nights haul.
Apart from those, the traps have been mostly full of tired looking brown creatures.

I got some gen. det. results through which added a couple of species.
The first from macro recorders Andy and Melissa Banthorpe from a batch of five Common Rustic aggs. that I collected on 6th August.
Results of gen. det. were ... Common Rustic, two male and two female, but the good news was a Lesser Common Rustic male was found. Thanks guys !
It got better, as I received an email from county micro recorder David Manning.
A new moth for VC30 .. 1022a Cnephasia pumicana.
This used to be quite a common moth (1022 Cnephasia pasiuana) but was recently split into two species so well done Mr M for being up to speed and spotting it !
Being a cautious man, David sent a genitalia structure slide  to micro mothing's equivalent of "The Man from Del Monte", John Langmaid, who said "Yes".
(You have to be a certain age to remember The Man from Del Monte and David is probably too young)

As I walked out into the garden this morning to check the traps, a strangely shaped creature buzzed around my head that looked like nothing I had ever seen.
Until it settled on my small pond surround.
Mystery solved....
It was a wasp flying around carrying a Large Yellow Underwings wing.... 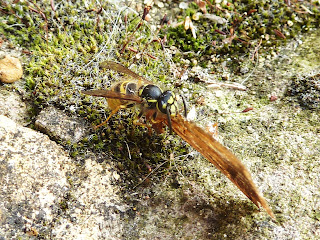