Phew ! Scorchio ! Record temperatures for 1st July.
I would feel sorry for the players at Wimbledon if they were playing for nothing.
People always get caught out on the few times we get this sort of weather, sunburnt backs and arms, red necks.
Speaking of red necks reminds me this is a moth blog, so here's some of my new moths for the garden species list ...
29th June '15
The first view I had of this moth was the underside as it rested on the trap perspex ...
Tinea semifulvella isn't quite as exciting but it is another one for The Dells garden site list.
This one expired during the photo shoot and was somehow hanging from a piece of cardboard by its antenna.
28th June '15
Morophaga choragella, Large Clothes Moth, another of the "garden firsts".
The vernacular name implies that it likes to munch on out-sized attire but it probably refers to the physical size of the moth.
30th June '15
July 1st saw a reading of 34 deg in the shade locally and it was followed by a hot and sultry evening, the wind eventually turning from S to W at around 02.30 a.m. and cooling things down a little.
The large Scots Pine in one of the neighbours garden is probably the reason I added Epinotia rubiginosana to the year list, the second record for the garden.

... and just as I was thinking my ID skills were approaching an acceptable level, along comes a moth that threw me completely.
Thanks to Matt Burgess for recognising it, although, like myself, he also thought it was a large micro when he first saw one in his trap a while back.
A very flat posture, variable wing patterns and a wingspan of about 30mm.
Silky Wainscot
1st July '15 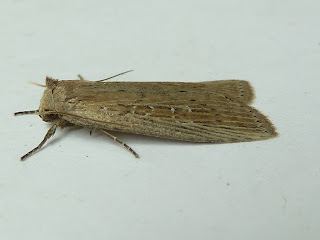