The 2nd record of Phoenix turned up on the wall near the trap, it's size and the large wing bar stand out immediately.
I quickly potted it up before one of the numerous Large Yellow "Blunderwings" disturbed it ...
Quite a few 2nd generation moths are showing up, lots of the smaller Brimstone Moths, plus Vine's Rustic, Small Ranunculus amongst others but the traps are still heaving with the common brown moths.
Orange Swift appeared for the first time last night and the Toadflax Brocades have done well with record numbers this year so far.
Migrant moths seem to also be doing well, Plutella xylostella, Silver Y, White-point (2nd last night) and Small Mottled Willow appearing in the Upper Caldecote traps, plus a pending possible Pearly Underwing , there's a mouthful !
The underwing ( shown below) doesn't show up as white like the similar and very common Turnip Moth,  these are almost see-through, and the heavy veins are unusual. The "hairstyle" is more like Turnip than the "mohican" style of Pearly but it is a little worn. One for the county recorders. 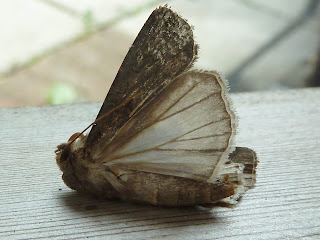