Nothing startling happening around the garden traps apart from another very late Heart & Dart.
Chestnut and Dark Chestnut can be a bit confusing.
Here is a comparison pic of both together.
These were in the trap this morning, both are fresh and well marked and easy to tell apart. Note the shape of wing tips, not so easy when worn as Chestnut (left) can be much darker and worn wing tips on Dark Chestnut can appear to be rounded but Dark usually looks more boat shaped and Chestnut appears more compact and broader.

Heart & Dart has probably been fooled by the late warm weather, this one is my 2nd in 3 days .. very late but fresh.
Green-brindled Crescent f. capucina
This fly was found dead in the traps this morning.
It is new for my garden, anyone know what it is ? 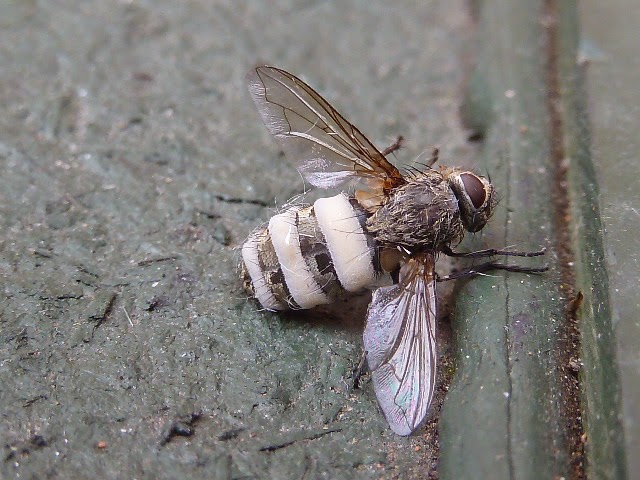 Cheers Stewart, thanks to your comment I've now checked the interweb and found the cause.
Entomophthora muscae, a fungal disease that affects fly species.
Quote from wikipedia
"When it is critically ill, it tends to crawl to a high point, straighten its hind legs and open its wings, a behaviour that ensures that the fungal spores are dispersed as widely as possible"
As can be seen on my example, straight legs and opened wings.
Posted by Trent Duval at 13:34