Both traps were fired up on the strength of a stiff southerly wind and very mild temperatures.
Hoping the wind would blow a nice migrant up to Bedfordshire.
No such luck, but a large Turnip Moth had me going for a moment as Pearly Underwing is still missing from my garden list. A third record of Scarce Bordered Straw is also on the cards, with several being reported from the home counties. 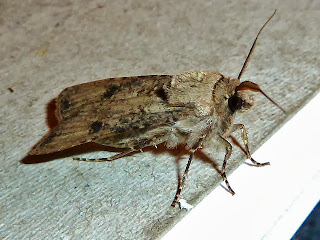