After the big build up by the over dramatic people from Television Land, ex-hurricane Bertha passed through undramatically.
OK, we got wind and rain, how unusual !
The night was much cooler however, and as the evening sky cleared over Bedfordshire, a very large full "super" moon lit up the night garden and the temperature fell to 11 degrees.
Moth numbers were well down on both numbers and species.
Straw Underwing (28) Orange Swift (18) Setaceous Hebrew Character (17) Large Yellow Underwing (14) Turnip Moth (11) made up the bulk of the catch.
Common Rustic numbers have fallen sharply over the past couple of nights.
Best of the catch was a Toadflax Brocade with singles of Angle Shades, Common Wainscot, Spectacle, and a Lesser Swallow Prominent.
The previous evenings catch produced a worn Six-striped Rustic amongst a trap full of common brown stuff 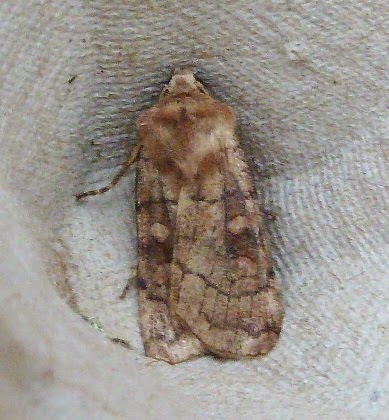